Skip to content
July 02, 2020
[ Instrument Network Instrument Development ] Amine compounds are an important class of chemical intermediates, which are widely used in biomedicine, coatings, pesticides, rubber and other industries. Compared with the traditional organic synthesis route, the selective hydrogenation of nitrile compounds based on supported metal catalysts to prepare amine compounds is a highly economical and environmentally friendly synthetic route, which has attracted extensive attention in the catalytic field. However, due to the high reduction potential of the CoN triple bond in the nitrile molecule, the selectivity of the catalytic route is generally low, and primary amines, secondary amines, imines, and hydrogenation by-products with lower added values â€‹â€‹are often obtained. Mixtures of various products greatly increase the cost of subsequent separation in this synthetic route. Therefore, how to design a high-performance hydrogenation catalyst capable of realizing the high-selective synthesis of a single amine compound (especially a secondary amine with high added value) while avoiding hydrogenolysis side reactions is currently the choice of nitrile compounds. A major challenge in the study of hydrogenation. 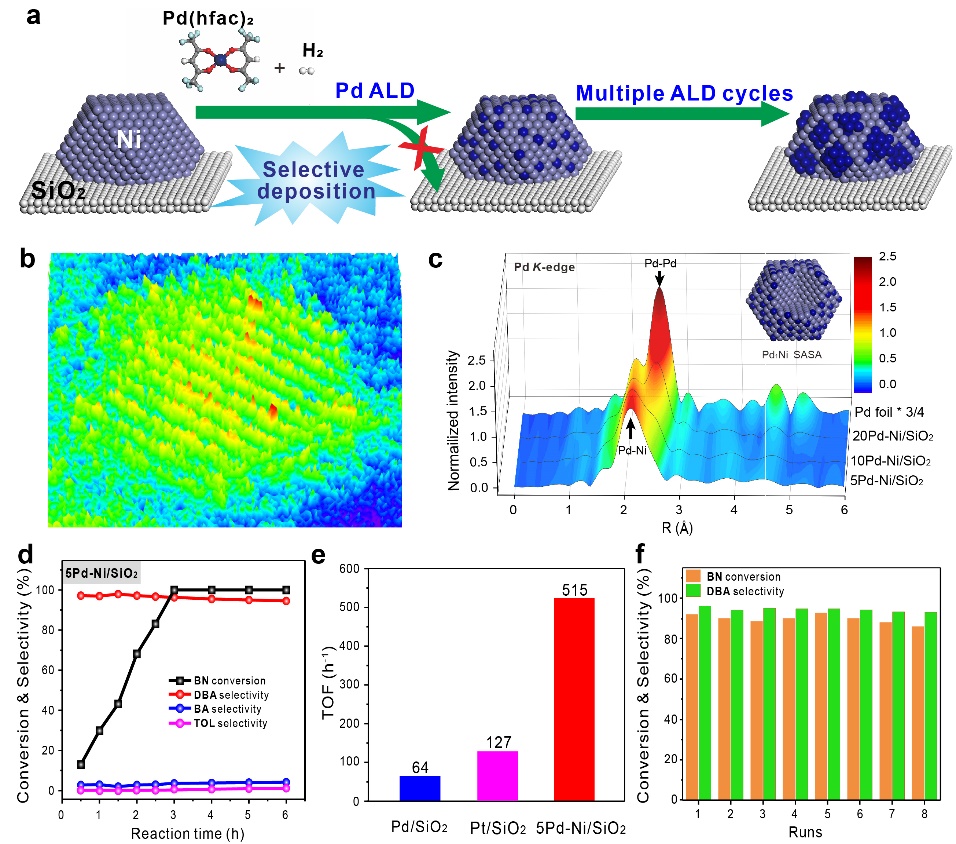 In response to this challenging issue, Professor Lu Junling of the University of Science and Technology of China designed a Pd1Ni/SiO2 Single-atom surface alloy (SASA) catalyst by using atomic layer deposition (ALD) technology to achieve high Catalytic conversion of active and highly selective nitrile compounds produces secondary amines while completely inhibiting the production of hydrogenolysis side reactions. Yang Jinlong's research group further revealed the molecular mechanism of selective regulation of catalytic reactions through theoretical calculations. The results of the study were published on the 1st issue of Quasi Pd1Ni single-atom surface alloy catalyst enabling hydrogenation of nitriles to secondary amines, published online in the journal Nature Communications, DOI: 10.1038/s41467-019-12993 -x). Wang Hengwei, a doctoral student at the School of Chemistry and Materials Science, and Luo Qiquan, a special associate researcher at the Hefei National Laboratory for Physical Sciences at the Microscale, are the co-first authors of the work.
Lu Junling's research group used ALD technology to selectively deposit Pd onto the surface of SiO2-supported Ni nanoparticles by using the â€œregion-selective depositionâ€ strategy (Fig. 1a). At the low coverage of Pd, the â€œnuclear-successâ€ was successfully synthesized. Shell" type Pd1Ni SASA catalyst. Among them, Pd atomic level is dispersed in the outermost layer of Ni particles, which maximizes the utilization rate of precious metal Pd. Spherical aberration correction transmission electron microscopy demonstrated that Pd exists mainly in the form of monoatomic dispersed species (Fig. 1b). Synchrotron radiation X-ray absorption spectroscopy confirms the precise regulation of Pd ALD cycle on Pd aggregate structure and through Pd-Ni coordination environment. Analysis confirmed the formation of the Pd1NiSASA structure (Fig. 1c). In the catalytic hydrogenation of benzonitrile, the Pd1Ni SASA catalyst (5Pd-Ni/SiO2) obtained breaks the traditional "metal-selective" correlation, and reverses the product selectivity compared to the Pd/SiO2 catalyst. The yield of the amine was greatly increased from 5% to 97%, and the occurrence of hydrogenolysis side reactions was completely suppressed (Fig. 1d). Even more gratifying is that under the same reaction conditions, the activity of the catalyst is 8 times and 4 times that of Pd/SiO2 and Pt/SiO2 catalysts respectively (Fig. 1e), and has excellent cycle stability (Fig. 1f) and good The universality of the substrate reflects the unique catalytic properties of the Pd1Ni SASA structure and good industrial application prospects.
Theoretical calculations The microscopic mechanism of catalytic hydrogenation of benzonitrile on Pd(111), Pt(111) and Ni(111) metal surfaces was studied in detail, and the two steps of the production and further hydrogenation of imine intermediates were revealed for the first time. Barrier differences are a key factor in creating a â€œmetal-selectiveâ€ correlation. Calculations show that on the Pd1Ni (111) surface, the effective barrier of benzonitrile hydrogenation to imine (1.06 eV) is significantly lower than the effective barrier of the imine hydrogenation to the primary amine (1.30 eV), and Pd (111) The surface is just the opposite, thus prolonging the life of the imine intermediate on the surface of the catalyst, promoting its further condensation with the primary amine to form a secondary amine, thereby effectively improving the selectivity of the secondary amine.
The results show that the precise regulation of the structure and microenvironment of metal active components is of great significance for improving the performance of metal catalysts, and provides an important reference for the rational design of high performance metal catalysts.
The research was funded by the National Natural Science Foundation of China, the National Key Research and Development Program, the basic research business fees of the Central University, and the Max-Planck Partner Group of the High-end User Development Fund of the Hefei University Science Center of the Chinese Academy of Sciences. Light source and Hefei National Synchrotron Radiation Laboratory machine support.